The exhibition Música Buena: The exhibition will focus on the rich history of traditional Hispano music from the arrival of the Spanish through the present.  Once in New Mexico, historic European traditions took on a new life and feel, blending with Native customs and reflecting the land, time, and place where these folkloric songs and traditions developed.

The exhibition will explore different forms of music such as special music played at different life stages (songs of birth, weddings, death), seasonal music (songs for Christmas, Lent, and  Harvest seasons) ,as well as liturgical and secular plays and reenactments. For example, one such tradition is that of Moros y Cristianos, which is based on medieval folk plays that re-enact the final battle between a newly unified Spain and the Moors who ruled for 800 years. The play represents multiethnic heritage and influences in Spanish culture and is the only play today still performed entirely on horseback. Another popular folk play, Los Comanches, is based entirely on historical events in the Southwestern US. This play depicts the joining of forces between the Spanish settlers and Pueblo Indians to fight and keep the invading Comanches out of New Mexican lands. There are several versions of this reenactment, each with its own unique flavor. Another popular tradition is El Baile de los Matachines which is still practiced in both Hispano and Genízaro villages and Native Pueblos, from the Río Arriba (Northern New Mexico) all the way south to Mexico & Guatemala.

The exhibition will feature close to 75 objects from the museum’s permanent collection and from private collections around the state. Some of these items include: a Matachines danzante costume; a 19th century New Mexican-made violin; a hand carved wooden matraca (rattle) made by Cordova artist José Dolores López; an antique handwritten book of Alabados (religious chants sung during Holy Week and at Funerals); and contemporary instruments made by musician Cipriano Vigil and other local New Mexican artists. A New Mexico Music Living Treasure, Vigil served as special consultant for the exhibition. Photographs and memorabilia will accompany the objects. The exhibition will include a substantial amount of the newly-digitized sound footage from the museum’s archives.  Video footage will also showcase contemporary practices of New Mexican traditions that continue today including the Baile de Los Matachines, Las Posadas and Los Pastores, Moros y Cristianos, Dar los días and Los Comanches. New recordings also include interviews and footage of traditions that are handed down from elder to younger generations. Sound and video stations will be included in the exhibition along with a space for live in gallery performances. Museum visitors will be able to access online materials and continue listening to the museum’s rich store of historic music long after they have left the museum.

New Mexican dramatic traditions can be religious, ceremonial, or secular-https://www.youtube.com/playlist?list=PL-Dx1Qh-1tek5ZcvuXHNfDo47H3ErEDLK

Photo Caption: The Character of El Demonio smiling after chasing away a group of shepherds in La Gran Pastorela, or Los Pastores (The Shepherds), a holiday play performed by the Jarales Choir Group for the Our Living Hispanic Heritage Project of the Museum of New Mexico [ca. 1980]. Photo by Mark Nohl, Moifa Archives. 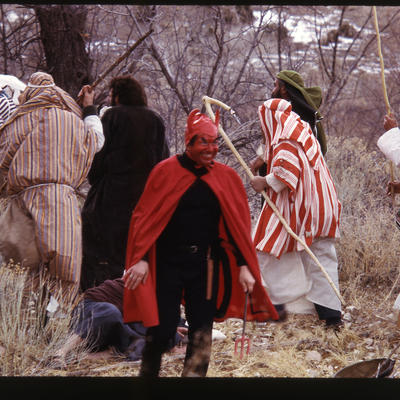 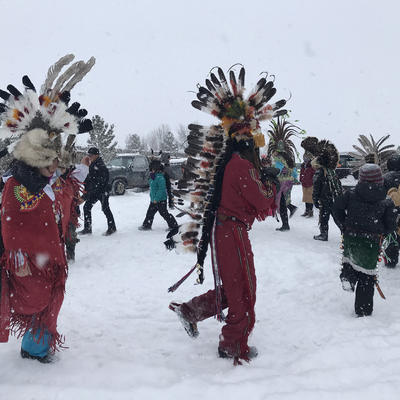 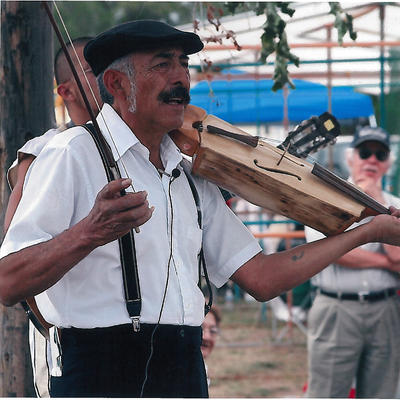 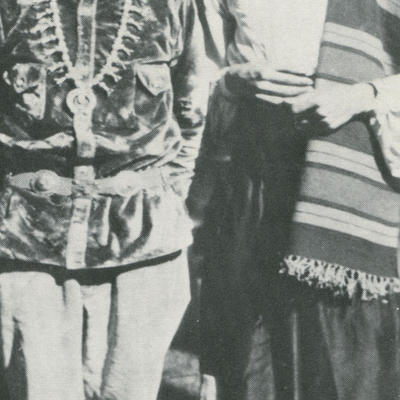 Fray Angélico Chávez and unidentified friend dressed for the Santa Fe Fiesta, Circa 1940 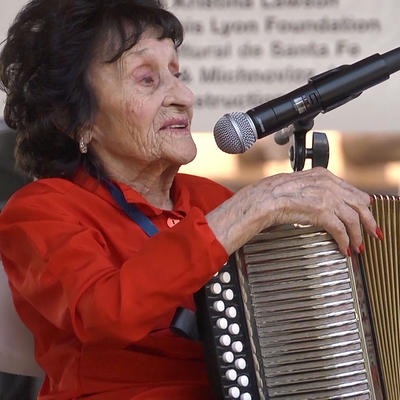 Antonia Apodaca on the Bandstand at Traditional Spanish Market 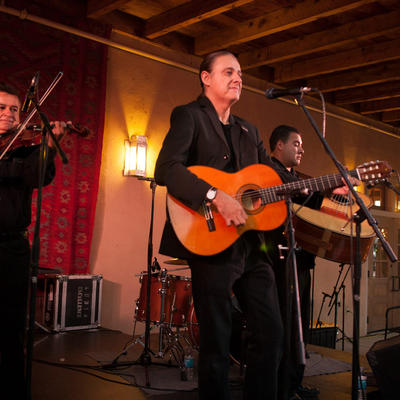 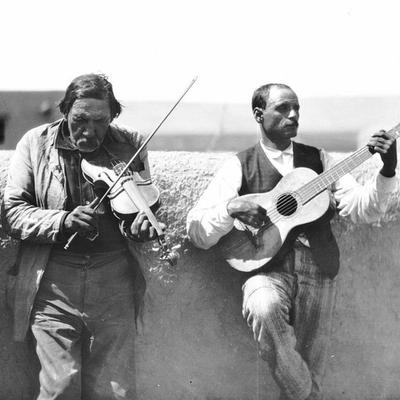