Papel picado literally means ‘punched’ or ‘perforated’ paper. This traditional cut paper folk art is found throughout Mexico and the former colonies of Spain as well as in the folk traditions of many other countries. In Mexico the art has reached a pinnacle of expression and is present at every major holiday in the form of brightly colored strings of cut tissue paper banners strung under the portals of homes and across the narrow streets of colonial villages.

Explore the historic and cultural context in which Day of the Dead/Día de los Muertos is celebrated. Birth and death, two of the most transcendental moments of life are celebrated by all cultures according to their particular belief systems, historical development, environment, and evolution within their culturally specific context. Every world culture has coping mechanisms to deal with the loss of life. Día de los Muertos (Day of the Dead) celebrates a communion between the living and the dead in a colorful festival of ritual and life. 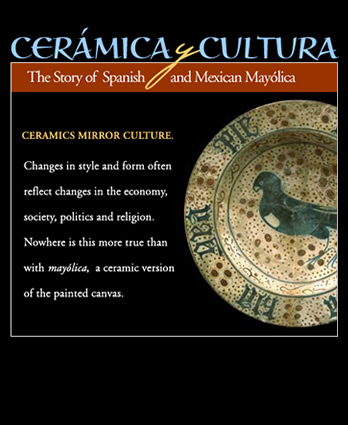 Cerámica y Cultura: The Story of Spanish and Mexican Mayólica

Explore the forms and functions of mayólica objects to understand the cultural and historic contexts that formed them.